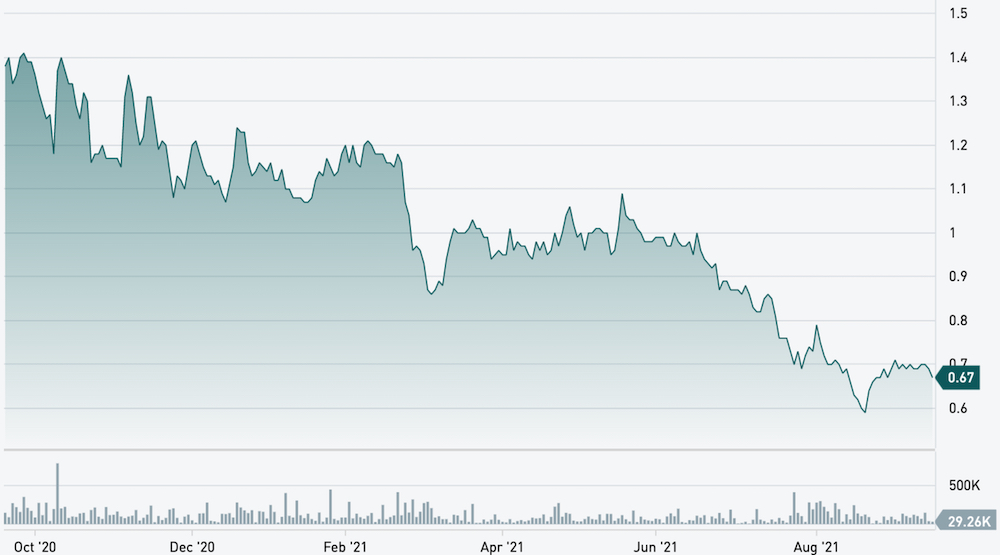 Two press releases in the first seven days of September brought refreshing news from Galway Metals. The company reported solid exploration momentum at both of its core projects – the flagship Clarence Stream gold project, in southwest New Brunswick and the polymetallic Estrades project in the Northern Abitibi of western Quebec.

First up was an update from Estrades, where it appears the company is starting to unlock the mineral potential of this brownfield asset, essentially in the headframes of former notable mines on the Casa Berardi Deformation Zone. Recent drilling at the former high-grade mine has returned encouraging intercepts of zinc, copper and gold mineralization.

Galway also continues to make steady progress with drilling at the district-scale series of discoveries at Clarence Stream, where the latest round of drill results demonstrates consistent high grades in previously untested areas. 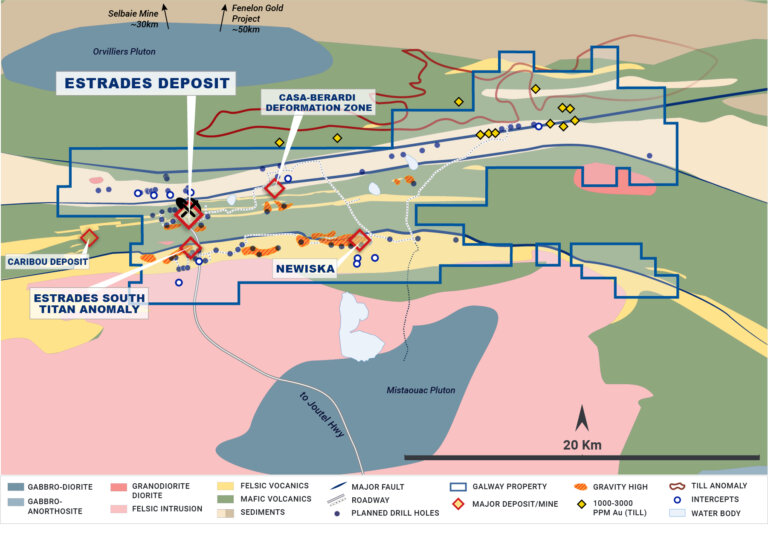 On September 2, Galway released a second batch of exploration drill results from the ongoing campaign at the Estrades property. Among the results is the deepest-yet intersection of massive sulphides at 1km depth – returning intersections as wide as 24m (16.1m true width) with zinc grading up to 11.4% in hole 64A (see Exhibit 2).

Galway encountered the mineralization below the copper-rich eastern portion of the Estrades Resource area.

While drilling did not all return resource grades, grades as high as 11.4% zinc plus 1 gram per tonne (g/t) gold over 0.7m provide Galway with enough conviction to, in conjunction with other drill results plus Titan IP and EM as well as gravity geophysical surveys, vector into a potential high-grade and wide source vent in the area. 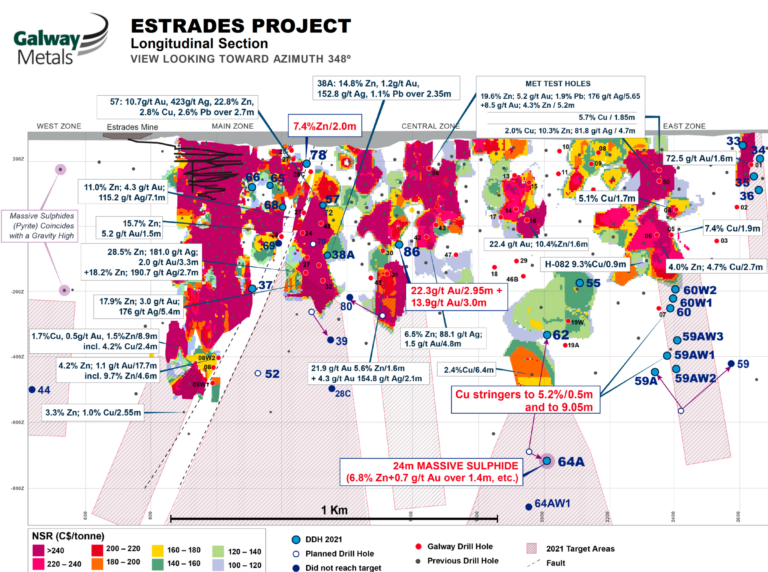 Another hole 300m below a prior copper-rich resource hole also returned 9m of copper stringers with results up to 5.2% copper over 0.5m (see Exhibit 3).

Two new holes, 59A and 60, were drilled with five wedges (three from 59A and two from 60). Galway has received the results for two intersections, hitting copper stringer zones with an intercept of 1.9% copper over 3.75m in wedge hole 59AW1 (again, see Exhibit 3).

It is located 300m below the deepest resource hole that returned 9.3% copper over 0.9m. 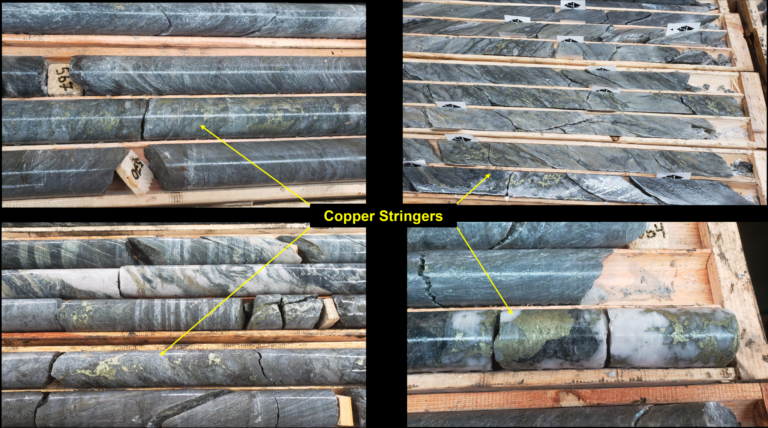 According to the company, all of the high-grade mineralization identified to date overlies a strong plumbing system, and Galway is intent on trying to find that potentially rich and much wider plumbing system.

Estrades has been only shallowly drilled to date relative to many polymetallic VMS deposits.

To date, Estrades has seen 220,000m of drilling along its three mineralized horizons. The company undertakes to continue the effort, and has expanded its 2021 drill program to 25,000m, up from 10,000m initially.

The property is extremely prospective for economical mineralization, being located immediately adjacent to, and west of the Agnico Eagle (AEM-TSX) / Maple Gold (MGM-TSX.V) Joutel Joint Venture, which hosts 3.9 million ounces gold between historic production at Telbel and current gold resources at Douay. Agnico has agreed to spend $18 million on exploration here beginning February 2021.

The property is also 24km east of Hecla Mining’s Casa Berardi gold mine, which is currently producing, and has 6.1 million ounces of gold between total production and current Reserves and Resources.

Three prospective horizons for mineralization occur on the property –  the past-producing host Estrades VMS mine, the Newiska horizon located south and the Casa Berardi Break located to the north of the Estrades horizon (see Exhibit 1).

On September 7 Galway released another batch of exploration drill results from the ongoing Clarence Stream program (see Exhibit 4), which expanded the Adrian Zone 44m east in the central gap area, and the overall zone to the southeast, as well as provided additional results within the eastern portion of the George Murphy Zone (GMZ). 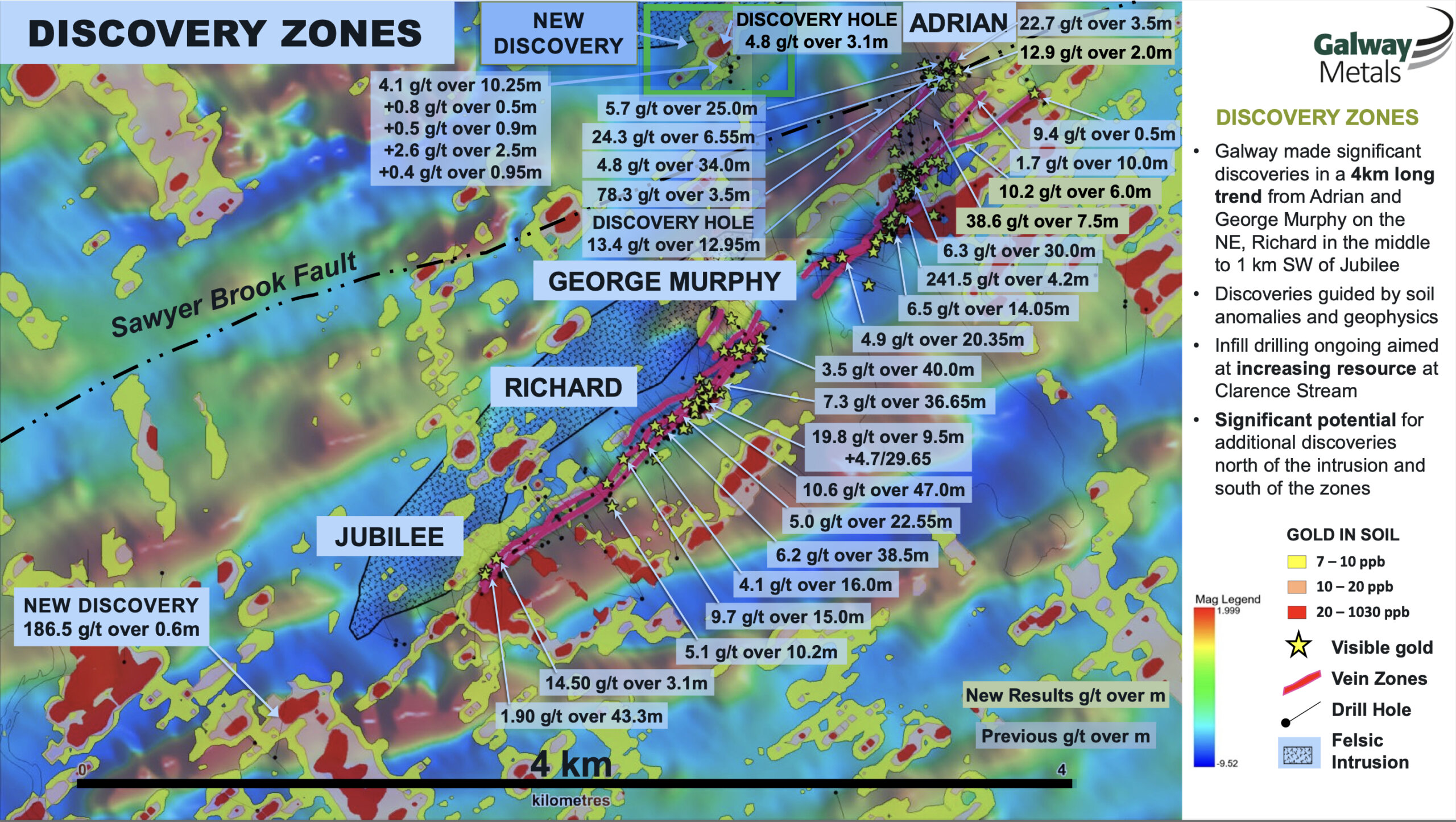 Also released were the first assay results from hole CL-116, which was previously reported to contain visible gold (VG) that expanded Adrian 49m to the southeast. Partial results received for the core sample returned 48.2 g/t gold over 0.5m within 12.9 g/t gold over 2m. Both these intersections remain open for expansion once all assays are received. 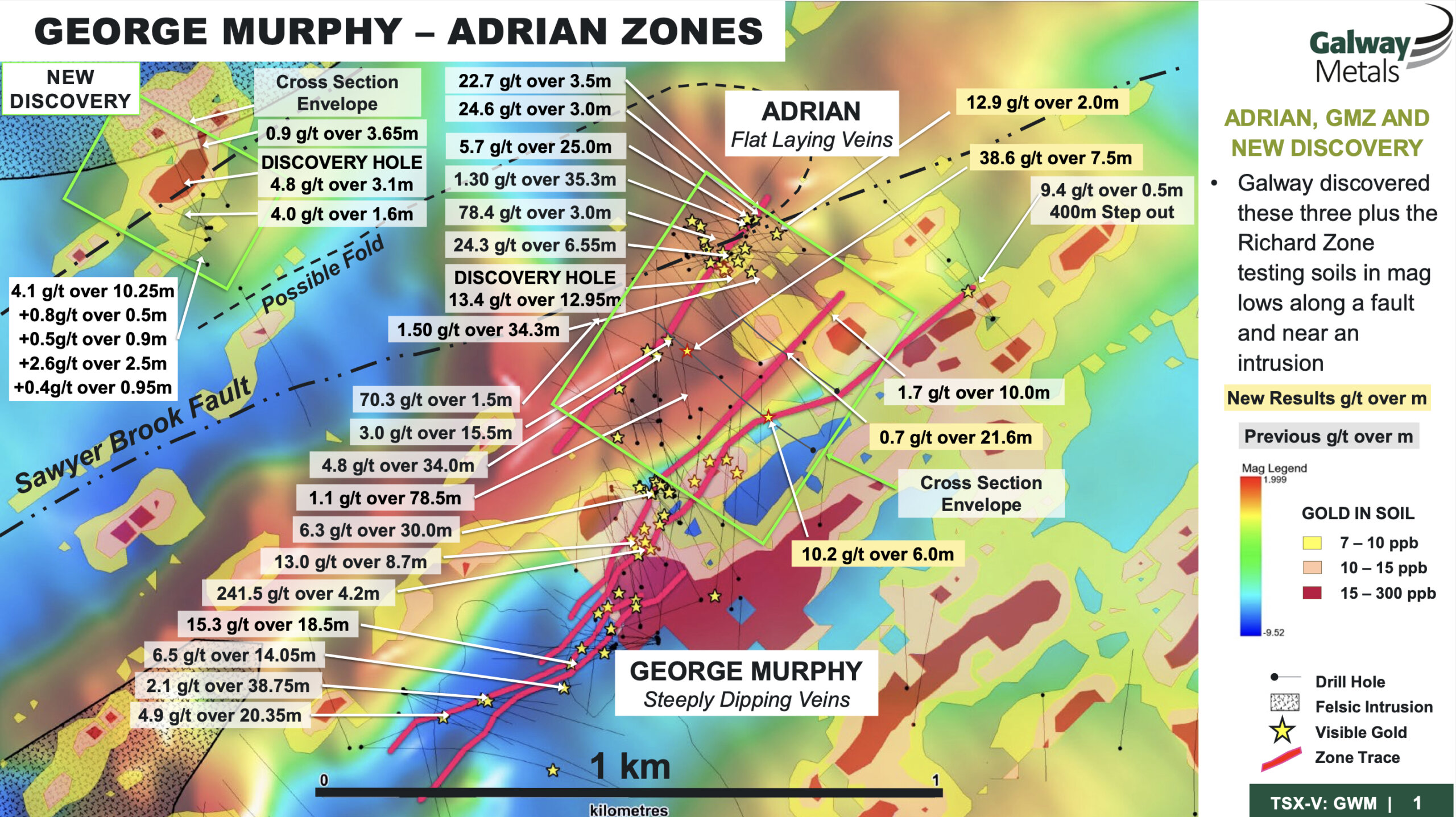 The holes were drilled within the eastern portion of the GMZ where Galway recently reported a 50% expansion to more than 1.1km with holes CL-75 and CL-109.

Hole CL-75 was a 400m wildcat step-out that was drilled to test the eastern edge of the soil anomaly that originally led to the discovery of the GMZ. This hole returned 9.4g/t gold over 0.5m.

Galway then drilled hole CL-109, which was approximately centered between the 400m step-out hole and the previous eastern limit of the zone. The hole returned 1.7g/t gold over 10m.

Galway is convinced all seven deposits discovered to date at Clarence Stream remain open in every direction. Further upside is present in the district-scale potential that we envision for Galway’s 65km long, 60,000-hectare land position.

A Clarence Stream resource update targeted for the third quarter is now scheduled for the first half of the fourth quarter.

Galway has more than 5,000 samples pending assay results at the labs. There is generally an 8-to-12-week delay in receiving results, and the company wants to incorporate key pending assays into the update.

Galway plans on incorporating Adrian, GMZ, Richard and Jubilee, which cover a strike length of 3.1km, as well as the existing South and North Zones, into the resource update.

For complete information, visit the Galway Metals website at galwaymetalsinc.com.

*For a complete description of Resource assumptions, please review the relevant technical reports