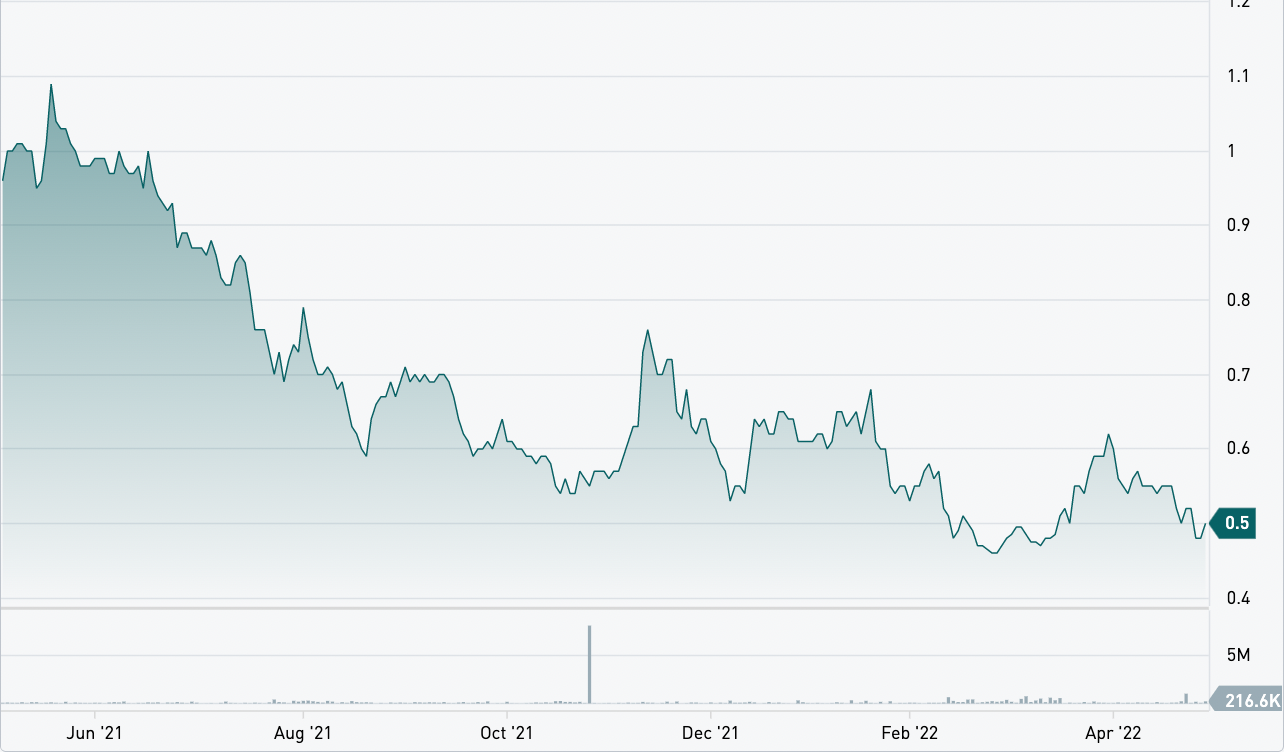 Galway’s extensive drill programs connecting mineralization from the initial discovery areas have resulted in a substantial increase in resources. Since the previous estimate (Sept. 2017), 106,272m of drilling in 337 holes has been conducted. Recall that Galway’s Clarence Stream Deposit is located in New Brunswick and is readily accessible with excellent infrastructure (Exhibit 1). 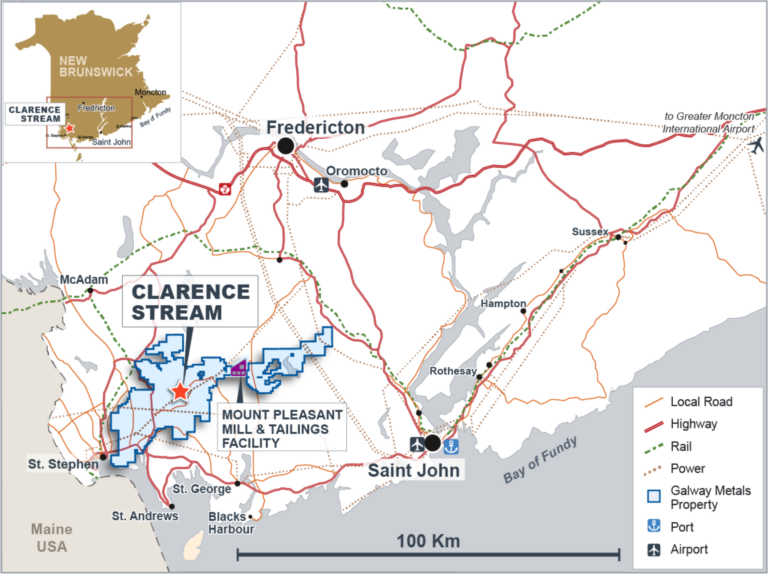 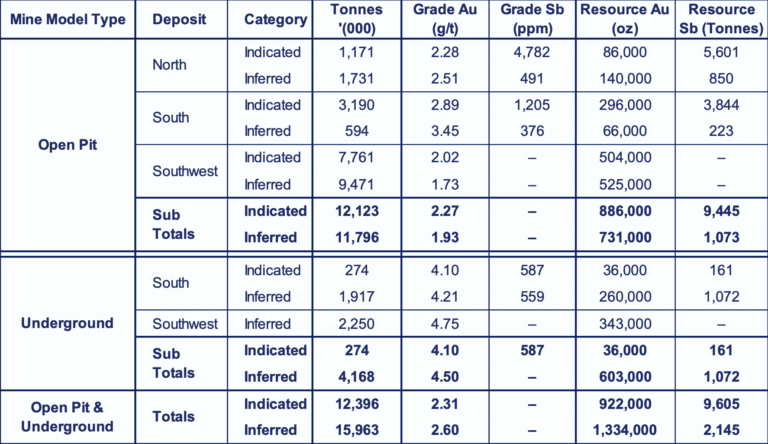 The Growth and Success

Galway’s discovery of the Adrian, George Murphy (GMZ) and Richard Zones, and the subsequent focused exploration drilling to establish a connection between these formerly separate deposits, and with the previously known Jubilee Zone, now combine for a 3.1-kilometre mineralized trend called the SW Zone. It is thought to remain open and contains high-priority drill targets for follow-up (see Exhibit 3). 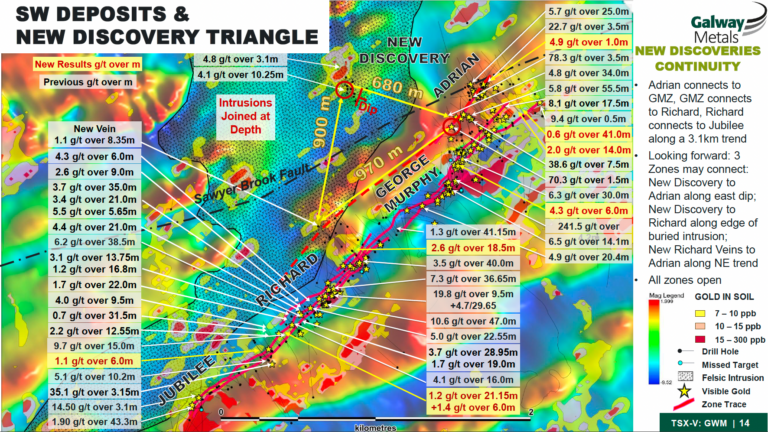 The substantial jump in resources was a combination of the new discoveries, lower cut-off grades for the open-pit constrained (reduced from 0.42 g/t gold to 0.38 g/t gold) and underground resources (reduced from 2.55 g/t gold to 2.00 g/t gold). These lower cut-off grades were driven by an increase in the gold price applied to the resource estimate from US$1,350/oz to US$1,650/oz. The newly termed SW Deposit (comprised of Adrian, George Murphy, Richard and Jubilee Zones) MRE incorporates three sizable open pits plus smaller cuts  (See Exhibit 4). 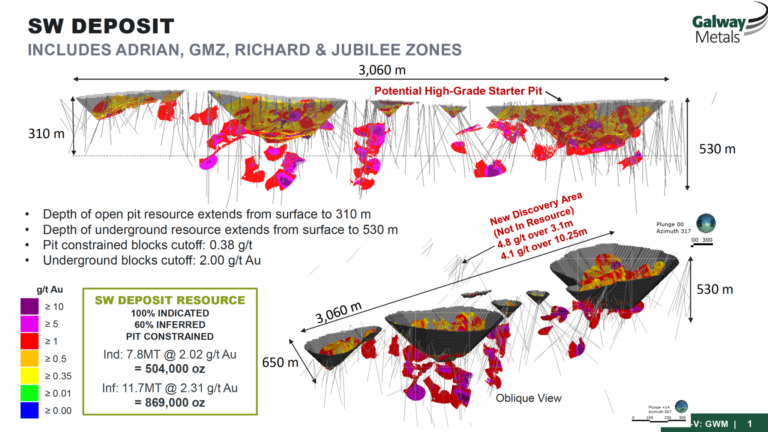 Notably, the MRE does not include several of the company’s previous discoveries allowing for further expansion and new discoveries. These include:

According to Galway, the Richard to Adrian, Richard to the discovery to the NNE, and the discovery to Adrian might be linked, providing a large triangle with the potential to host significant gold mineralization – all outside the current resource areas but near them (See Exhibit 3).

With an updated MRE in hand, Galway plans to initiate a Preliminary Economic Assessment (PEA). Galway has communicated the focus of its ongoing drilling program is to continue to expand the existing zones that are all open, to follow up on the three previous discoveries outlined above that weren’t included in the MRE, and to make more discoveries to enhance the emerging gold district further.

The previous discoveries represent high-priority targets outside the resource areas where Galway is planning follow-up drilling in its 150,000-metre program, using six drill rigs through 2023.

Another previously released discovery Galway plans to follow up is Oak Bay. Oak Bay is 19 km to the west of The South Zone. The zone at Oak Bay has been drill-delineated with strong, consistent intersections.

Besides drilling to expand the existing zones, and the discoveries that are not part of the updated resource, several high-priority targets have yet to be drilled at Clarence Stream. These are said to exhibit better evidence for gold discoveries than the evidence that existed before Galway’s discoveries (see Exhibit 5). Note the extensive and high-grade soil sample results from Tower Hill and a zone southeast of Tower Hill. Note that these targets are interpreted to have similar characteristics to existing deposits – high soil anomalies, mafic intrusives around felsic intrusives and proximal to the Sawyer Brook Fault.

Upcoming catalysts would also include metallurgical and ore sorting tests. 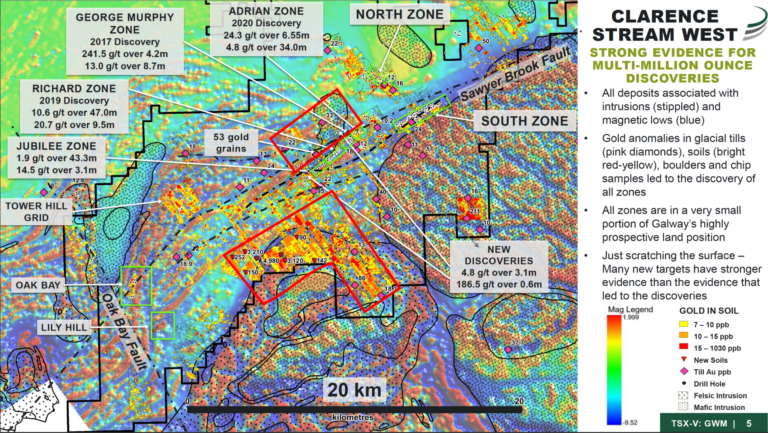 In addition to the gold resource, the deposits host antimony, one of Natural Resources Canada’s (NRCAN) critical minerals.

For full details from the Press Release, please click here.

*For a complete description of Resource assumptions, please review the relevant technical reports.