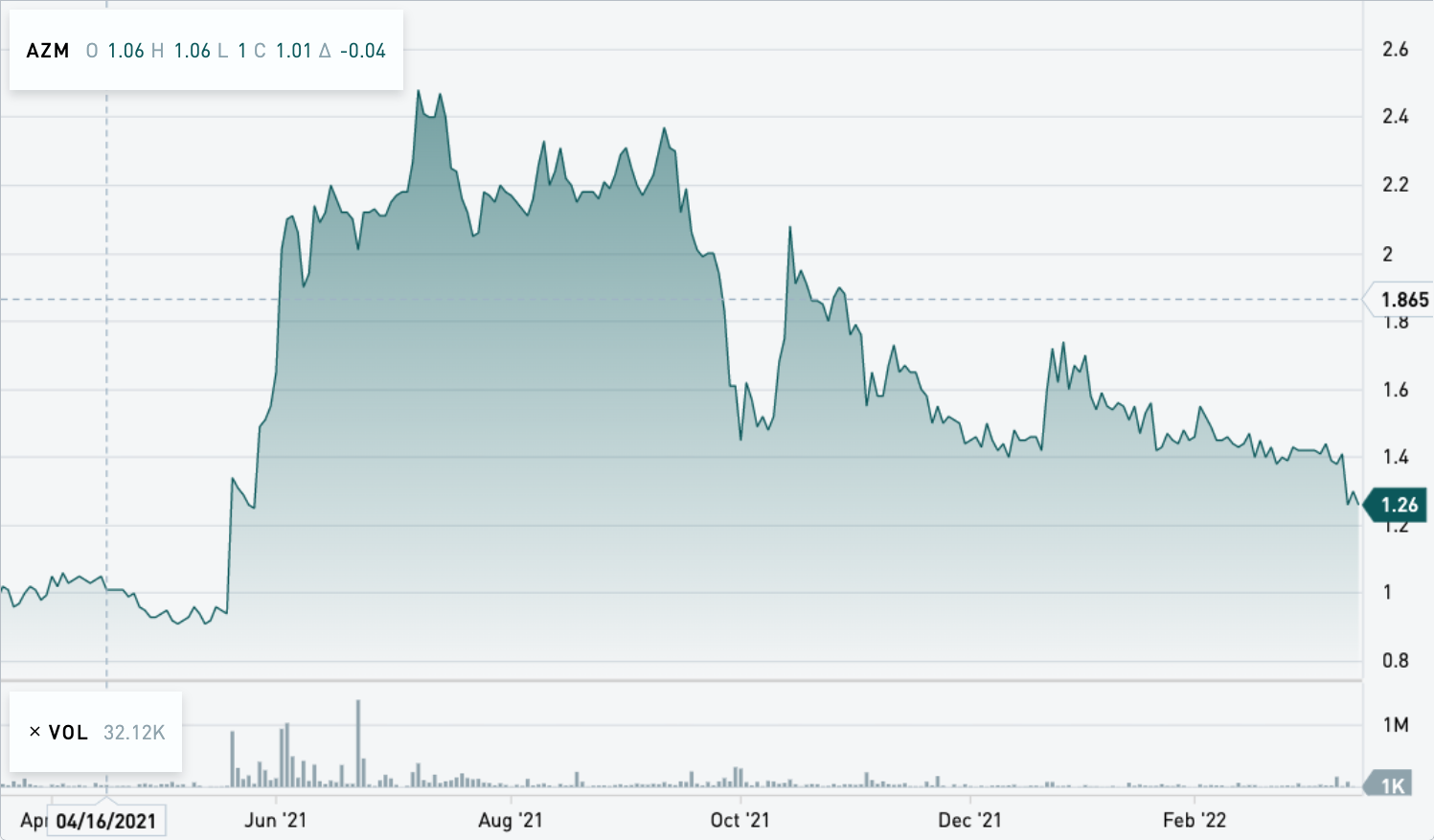 The company reported that mineralization had now been traced to a depth of at least 600m and the deposit remains open at depth.

The ongoing 20,000m, fourth drilling campaign on the property was designed to test for mineralization to at least 800m depth. The drill results will feed into a maiden resource estimate currently in the works (see Exhibit 2).

Exhibit 1. Azimut’s Landholdings in the James Bay Region of Quebec. 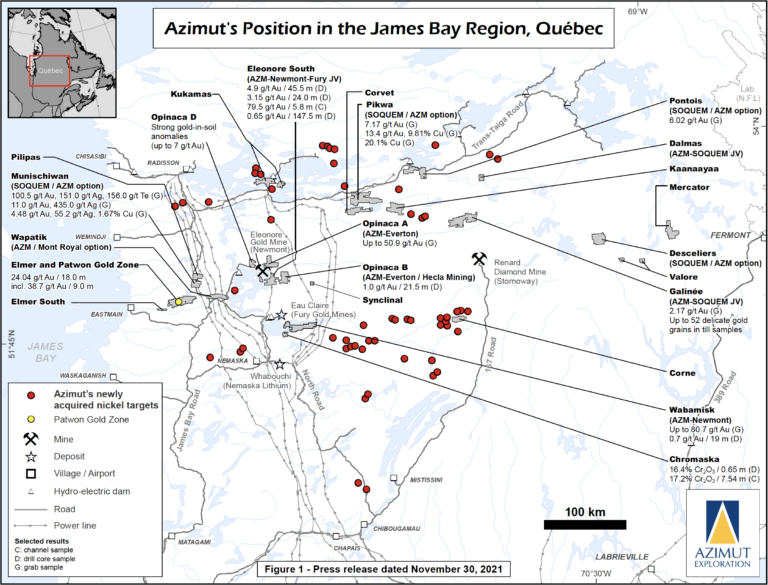 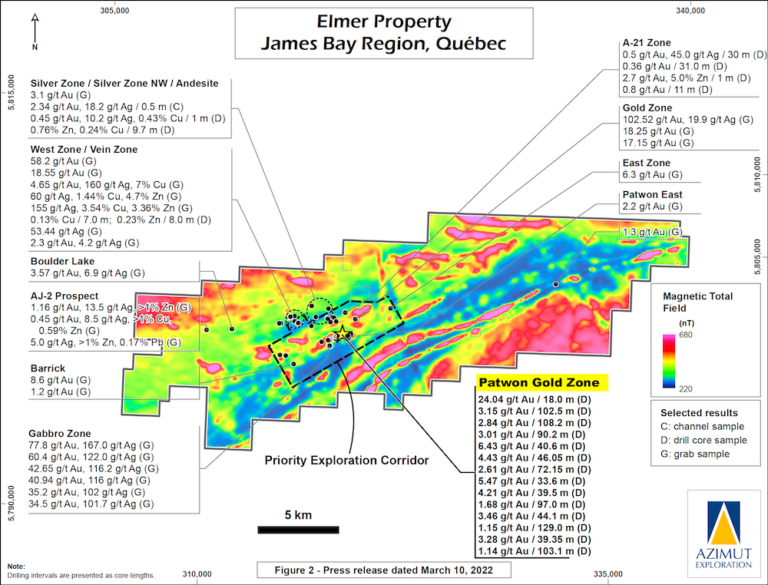 Hole ELM21-125, which Azimut drilled at a low angle through the mineralized envelope to provide more information about its geometry and continuity (see Exhibit 3) returned 1.08 g/t gold over 286.9m. For this hole, Azimut said core length intervals were reported as mineralized down-hole lengths thus true widths have not been estimated for this hole.

Exhibit 3. The Patwon Gold Zone at the Elmer Property, Quebec. 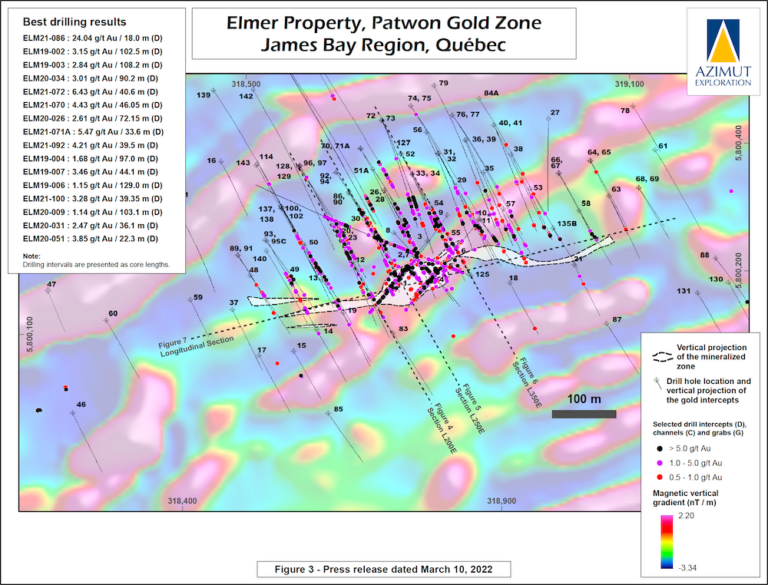 With the release of the latest results, the Patwon Zone has now been outlined along a 580m strike length and now extends from 450 to 600m, with an average estimated actual width of 35m.

Patwon remains open at depth “with a robust and consistent” core zone, according to the Company,  with grade times thickness (GT) factors higher than 50 based on true estimated widths (see Figure 4).

According to Azimut, visible gold at Patwon generally appears to be a reliable predictor for GT factors close to or higher than 50. Of the 18 delineation holes drilled to date, nine have displayed visible gold.

Exhibit 4. A Conceptual Resource Model for the Patwon Deposit. 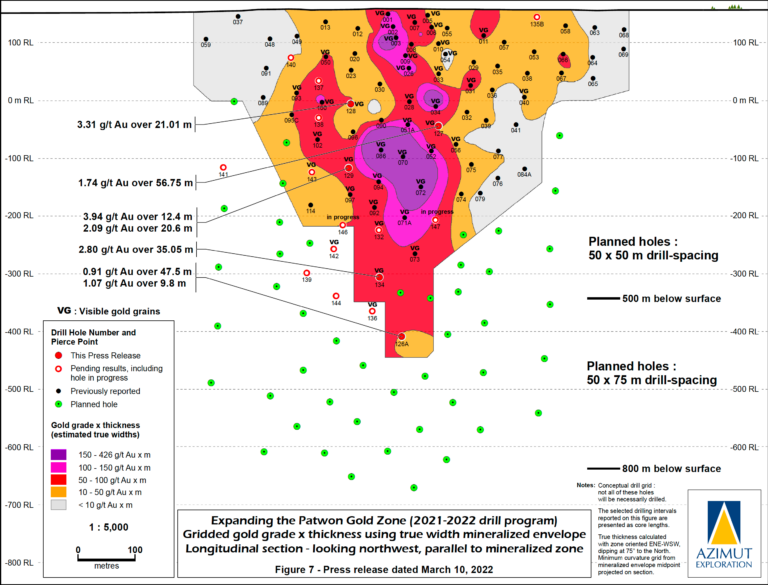 The company has engaged InnovExplo Inc. to prepare the resource estimate. The current program results will be incorporated into a maiden Mineral Resource Estimate supported by a technical report compliant with National Instrument 43-101.

Meanwhile, Azimut is in parallel defining prospective targets near Patwon with an extensive reverse circulation drilling (RC) program. To date, 214 RC holes have been drilled through the glacial sediment cover to collect bedrock samples over a structural corridor containing strong gold anomalies in till. A diamond drilling phase is planned to follow up on these results.

For more information, visit the Azimut website at http://www.azimut-exploration.com.