Nothing Beats Gold in Uncertain Times

Nowadays, there is no shortage of surprises. Between Covid variants, pandemic-fatigue and now, the Ukraine-Russia crisis ballooning to cold war proportions, we could go on at length about the uncertainties facing financial markets today. Add from the past year the highest annualized inflation rates (Figure 1) since the 1980s into the mix and a volatile market is the result. This shakiness is not a surprise though, markets have been shaky since the short recession at the beginning of the pandemic. So, what have markets done historically during uncertain times with high inflation? The markets usually turn to gold.

Investors buy gold because it has historically been a store of value in times of inflation and geo-political uncertainty. During such times, gold tends to hold value better than other assets, and importantly, is widely exchangeable. Adding further benefit, gold tends to have a low correlation with equity markets, meaning it keeps its value and offers diversification benefits when included in investment portfolios. But despite gold’s proven historical track record, a newcomer has arrived looking to challenge gold for store-of-value market share. Over the past couple years, digital cryptocurrency Bitcoin supporters have promoted bitcoin, and other cryptocurrencies, as a ‘digital gold’, attempting to make the case that it too offers comparable store-of value benefits.

[…] gold has fulfilled its role as a safe haven asset and bitcoin is just too volatile and too speculative to be considered a store of value asset.

Does Bitcoin stack up as a store of value, or as a safe haven? In the following analysis, we have used daily, weekly and monthly price data from the past year to calculate historical daily, weekly and monthly returns, associated standard deviations and maximum drawdowns. Standard deviation and maximum drawdown are both measures of volatility, whereas maximum drawdown measures downside volatility. In each category gold outperformed bitcoin as an actual store of value and the results call into question bitcoin’s new image-campaign as ‘digital gold’. Behind the pump, our data suggests Bitcoin remains firmly in speculative investment territory.

In addition to being a lower-risk store of value, gold outplays Bitcoin once again as a diversifying asset. As well as being a superior store of value, our analysis of correlations (outlined in more detail below) shows that gold offers superior diversification benefits compared to bitcoin. Furthermore, we would expect if bitcoin was like ‘digital gold’ it would behave similarly to gold under the same conditions driving gold demand. In which case, it seems reasonable to expect them to be at least moderately correlated during periods of high inflation and geo-political crisis. However, we have found that gold and bitcoin are not closely correlated with each other over the past year – despite plenty of need for assets that maintain value over the period.

Gold’s Performance Steady as a Rock Amongst Bitcoin’s Turbulence 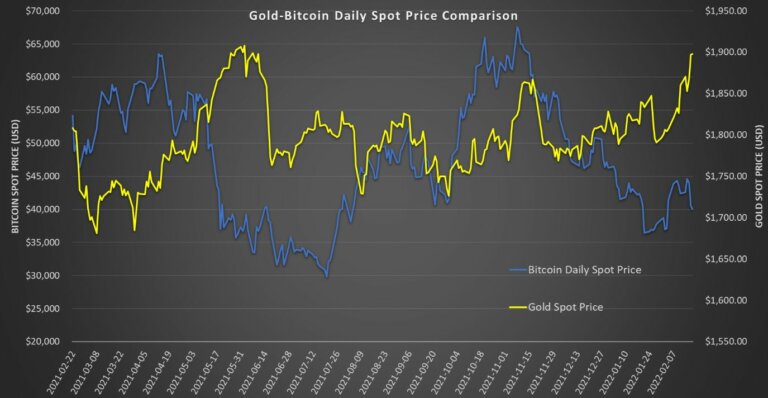 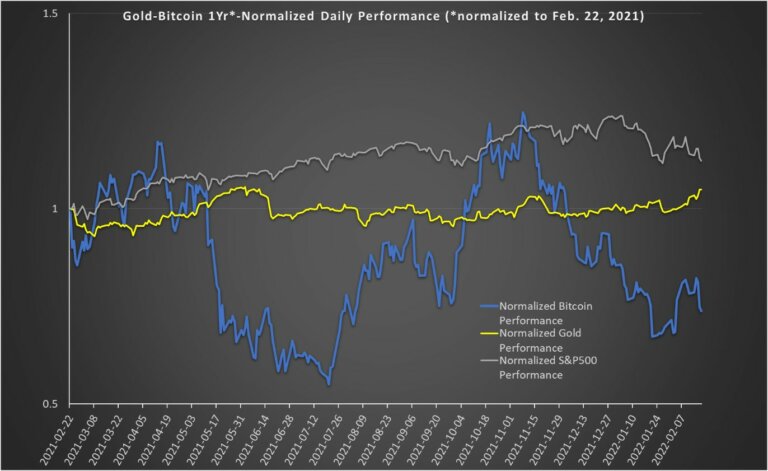 As observed in Figure 3, while gold generally maintained a steady increase in value over the year, bitcoin suffered two major periods of price decline starting in May 2021 and November 2021, of which we still have not seen a recovery from the latter. Bitcoin’s price decline, which began in May 2021, coincided with Elon Musk announcing Tesla would in fact not accept Bitcoin as payment for vehicles. Reaction to the Colonial Pipeline Ransomware attack in June also contributed to the decline before Bitcoin eventually recovered by July 2021. The current period of decline from Bitcoin’s November 2021 peak has been linked to increasing government intervention, as seen by China and Russia, superimposed with the general market declines associated with the Fed’s bond tapering and hawkish rate signals. What we are highlighting here, is the speculative nature of bitcoin. An asset this speculative cannot be a store of value asset by definition.

One final point to be made with the performance comparison concerns the current Ukraine-Russia crisis. Around mid-January the US blew the lid on Putin’s plans for Ukraine, opting for an information dump to bring the intelligence out in the open and force Putin to back down. As Russia dug in, markets were, and continue to be, spooked. From January 1, 2022 to February 18, 2022 gold increased by over 5%. Over the same period Bitcoin declined by over 13%, the opposite of a store of value during geo-political crisis.

The Risk Metrics and Correlations Tell the Same Story

Another way to measure volatility is drawdown. Drawdown is a risk measurement that captures downside volatility and is found by measuring the percent decline in value from peak to the following trough. We see in Table 1 that in each case, using daily, weekly or monthly data, gold has much lower risk in downside volatility terms with a maximum drawdown value of 13.56% using monthly returns. By comparison, Bitcoin’s maximum drawdown over the past year is over 40% using any frequency of return.

Diversification is Another Reason to Hold Gold

Using the S&P500 Index as a market proxy, we see in Table 2 that gold has a low correlation with both Bitcoin and the market. In contrast, Bitcoin shows a much stronger and positive correlation to the market, especially when weekly and monthly return data is used. When using weekly and monthly return data, Bitcoin shows a correlation of 0.48, again behaving the opposite we would expect from ‘digital gold’.

Table 2. Correlations of Daily, Weekly and Monthly Returns Over the Past Year 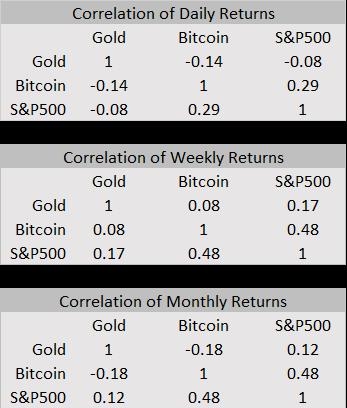 In this commentary, we have focused solely on price data from the past year. We view this time period as appropriate to measure an asset’s effectiveness as a store-of-value considering inflation over the past year has jumped to levels not seen for forty years, geo-political instability has flared to levels last seen during the cold war’s heyday and China continued to rock the geo-political boat all year. At the very least, over this prior one-year period, we determine that gold has fulfilled its role as a safe haven asset and bitcoin is just too volatile and too speculative to be considered a store of value asset. A digital gold, bitcoin is not.

Verdict: For gold, there truly is no substitute. 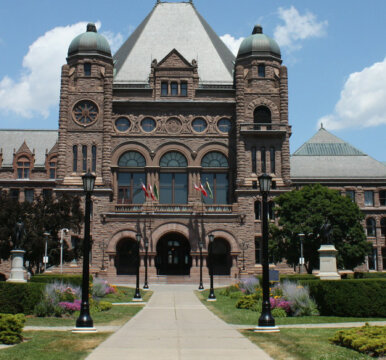 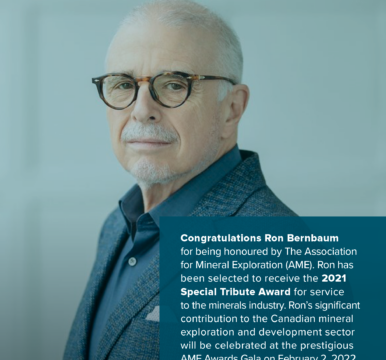 Meat, Spice and Sizzle. Fury’s Cooking over the Next 18 Months 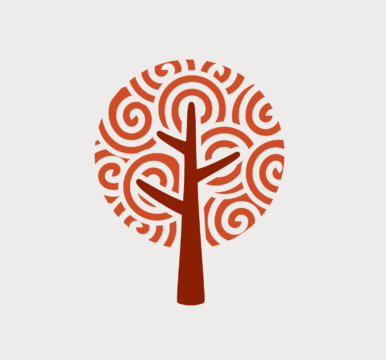 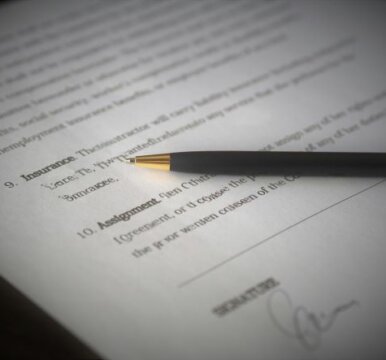